Best in Supplements / Reviews / Serovital Reviews, Ingredients, Does It Work?

Serovital Reviews, Ingredients, Does It Work?

SeroVital is a renowned supplement with a number of benefits. In this review, we look at these claims, discuss the benefits and ingredients and find out if they are effective and safe.

Human Growth Hormone (hGH), which is a single-chained amino acid hormone, is shown to boost metabolism, improve blood circulation, decrease production of fat cells, tone lean muscle, and promote better skin 1. SeroVital hGH can be a good stimulator of this component, which starts to lose its levels as soon as by the age of 25.

Once the pituitary gland produces human growth hormone, it enters the bloodstream to distribute throughout the body 2. This hormone is critical to our growth; essential for cell repair, metabolism, growth, strength, and recovery.

This review is part of: The Best Anti-Aging Supplements You Can Buy

However, by the age of 25, the levels of this hormone begin to fall. A decrease in hGH causes tiredness, difficulty of sleep, mood swings, and wrinkles. In other words, we begin to look and feel older. This is why our bodies begin to "wind down" at that age.

Use of SeroVital promotes healthy aging by supplementing with amino acids linked to higher hGH synthesis. SeroVital claims to be able to increase hGH levels by 682%.

Looking to feel better and younger?: The Best Collagen Gummies You Can Buy

Each supplement has a unique set of ingredients - amino acids, vitamins, and minerals - that provide a variety of benefits, including:

It is worth noting that having higher-than-average hGH levels in your body has drawbacks 4. In a regulated daily dose, all of the components in SeroVital are natural and safe. The usage of this supplement, then, should not be harmful if taken for an extended period of time, and that is the most important thing to know before getting more info about SeroVital reviews.

If you are concerned about SeroVital side effects, the components used should not be a source of worry. However, there is still debate over the impact of excessive human growth hormone production on the body 5.

Human growth hormone (hGH) has been linked to the following long-term side effects, according to research:

Although SanMedica International claims users can discontinue use whenever needed, some have reported withdrawal symptoms such as tiredness and lack of energy. According to research studies, hGH discontinuation might cause major negative effects such as irritability and depression 6. 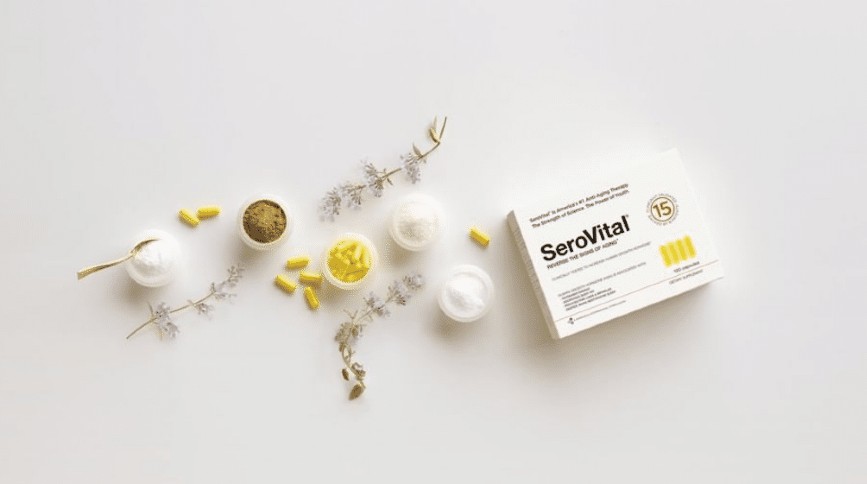 This is an important amino acid that aids in the formation of muscle protein, the reduction of stress, and the absorption of calcium. It also aids in the recovery of sports injuries and surgeries. L-lysine hydrochloride promotes collagen development, allowing it to be used for skin regeneration 9.

L-arginine has been shown in recent studies to increase hGH yield 10. The majority of these studies suggest that this amino acid alone will boost hormone production by 100%. Aside from that, L-arginine can help with metabolic and vascular function.

Came here looking to a better recovery for your muscles?: The Best Muscle Recovery Supplements You Can Buy

Oxo-Proline is another amino acid that aids in the prevention of oxidative stress, which contributes to aging. It may also help to enhance metabolic processes and memory function 11.

N-acetylcysteine (NAC) has not been scientifically proven to have any medical benefits. It is commonly used to minimize mucus production and as an antioxidant.

L-glutamine is the most common amino acid in the body and has anti-inflammatory properties. It also promotes cell regeneration and can be beneficial to the skin 12.

Schizonepeta tenuifolia is a catnip-family herb that has historically been used in Chinese medicine to treat colds and fevers 13. The powder has a euphoric effect, which improves mood and energy levels.

hGH is essential for bone and muscle development, body composition, cell repair and metabolism. It can improve strength and exercise performance while also shortening recovery times 4.

It is also linked to body fat levels. Those with more body fat tend to have lower hGH levels. You can, however, naturally boost your levels by decreasing weight 5.

hGH levels rise following activity and sleep, with more created at night than during the day. Because hGH levels steadily fall as you age, many people assume that raising them will help you age more slowly 6.

hGH is linked to enhanced physical performance - something that gradually diminishes as we age. This is why athletes and other elite performers promote hGH. Supplementation with hGH through supplements like SeroVital could help individuals perform at their peak for longer periods of time.

As an athlete or elite performer, you should read also this: The Best Dopamine Supplements You Can Buy

SeroVital's various amino acids may help with weight loss or at the very least boost lean muscle mass. Many bodybuilders use amino acids for this purpose, although studies on their efficiency are either contradictory or inconclusive.

One study, for example, discovered that oral supplementation with amino acids capable of raising hGH did not result in a greater increase in muscle growth and strength than strength exercise alone 4.

The majority of people are interested in SeroVital to help them lose body fat, but no formal research has been conducted to back this up. Some SeroVital users are unsure whether the weight loss they have observed is directly related to using the supplement. This is how reviews appear:

Going the traditional path for weight loss—focusing on a well-balanced diet and exercise—appears to be significantly more beneficial than SeroVital.

SeroVital Advanced, What It Is? 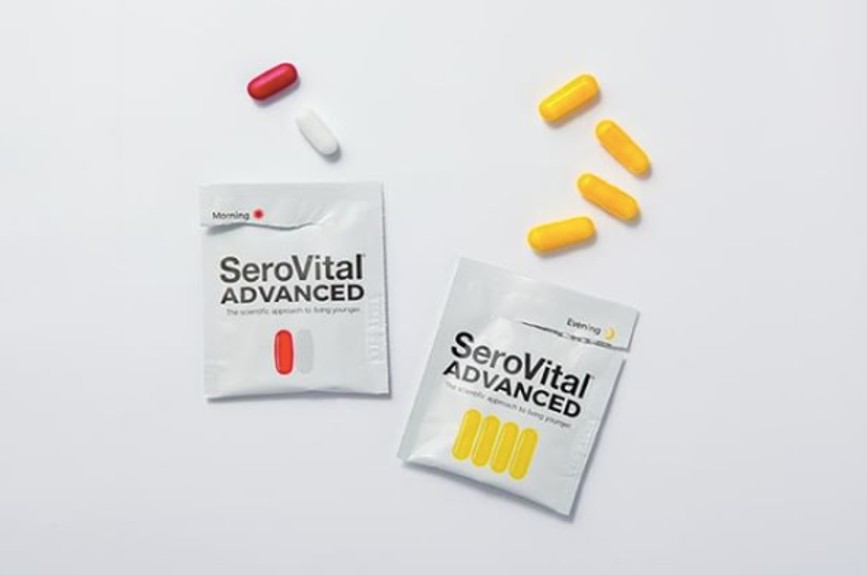 There is also a SeroVital Advanced, another supplement from the same brand which includes, in addition to the ingredients mentioned above, the following:

This SeroVital Advanced Formula also contains a patented blend of the following components:

Collagen peptides? We have reviewed the best bovine ones: The Best Bovine Collagen Peptides You Can Buy

How Does SeroVital Work?

According to the experts, SeroVital's mixture of ingredients performs best when taken on a daily basis. This supplement is marketed to women over the age of 40, although it can be used by anyone over the age of 18 (so, yes: men also can take and use SeroVital).

The SeroVital formula features a mixture blend of amino acids that have been clinically demonstrated to improve the body's natural production of hGH without introducing a synthetic version of human growth hormone, or any hormone, into the body. SeroVital's proprietary blend activates the pituitary gland, which is responsible for the production of hGH in the body.

The prescribed dosage is four yellow tablets taken on an empty stomach two hours after eating and no food for the next two hours. It is important to take this supplement without food because it may interfere with the formula's effectiveness.

Consumers can expect results within three months of starting this supplement. You must take the doses without missing a day during this period. SeroVital's beneficial effects only last as long as you are taking the supplement according to the manufacturer.

Yes, but maybe not for the reasons you believe. If you want to increase lean muscle mass, lose body fat, or increase your sex drive, taking SeroVital as a dietary supplement might be beneficial.

Data from research is inconclusive as to whether these supplements can directly increase hGH levels, as the statements suggest. Production of human growth hormone (hGH) gradually decreases with age, and although the anti-aging effect may be tempting, amino acids are not a miraculous cure-all.

However, the vitamins and minerals incorporated in a 30-day supply of SeroVital are beneficial themselves in many ways and may generate positive effects on the body as a whole 3.

Bottom line: If you want to naturally raise hGH levels and lose weight in a safe way, talk to your doctor first about any and all dietary supplement or product choices.

Who Should Use SeroVital?

In general, SeroVital is marketed solely for women in their mid-40s who wish to look revitalized, vibrant, and with less indications of aging. That said, SeroVital is an option for men, as both men and women participated in the SeroVital clinical research.

Where To Buy SeroVital

SeroVital is available at major retailers (including Costco, Walmart, CVS) as well as online. The cost of a box changes based on the program you choose. SeroVital costs around 80$ if you simply want to sample one packet for a 30-day supply.

SeroVital Advanced costs roughly $20 more than the other options. If you find this to be too pricey, alternative supplements may be a better fit for your needs.

For the most part, many of the product reviews of SeroVital were very good. The product scored 4.2 out of 5 stars on Amazon, with over 3400 reviews. Many satisfied customers reported improvements in their energy, mood, weight, and skin. Most have experienced minimal improvement, but are still eager to give the product another shot. There were some buyers dissatisfied with the outcomes, claiming that SeroVital had the opposite effect and caused negative side effects.

If you believe you could use more energy, a better mood, or a stronger immune system, a 30-day pill like SeroVital-hgh is a legal and safe approach to stimulate your body's natural production of HGH. SeroVital, unlike HGH injections or most supplements, does not enter your body from an outside source, therefore your body does not develop a dependency for it.

What Is This Supplement?

SeroVital is a dietary supplement formulated with a proprietary combination of amino acids designed to increase the synthesis of human growth hormone (HGH) in your body. This supplement’s main goal is to enhance the appearance and energy levels of the consumer.

What Are Its Ingredients?

The active ingredients in SeroVital’s formula are L-Glutamine, L-Lysine HCl, and L-Arginine HCl, which are amino acids. It also contains N-Actyl L Cysteine (NAC), which is a compound that helps the body produce protein. Oxo-Proline is an amino acid that boosts the production of hGH (human growth hormone).

What About The Side Effects?

There are a few side effects that may result from taking SeroVital. The most common ones experienced are nerve, muscle, and joint pain, edema, numbness or tingling sensation, low blood sugar, fatigue, and mood swings. These are short-term side effects as long-term effects aren’t established.

What Is Its Price?

The cost of SeroVital will vary depending on whether you purchase from the manufacturer or retail stores, and the price varies depending on your subscription type. They offer one-time purchases for $99/box, a monthly subscription for $79/box, or $198 for a 3-month subscription.

Where Can I Buy It?

You can buy SeroVital from www.serovital.com. SeroVital is also available at Costco, GNC, Ulta, and Amazon. The cost of SeroVital varies between these retail options and package size. Costco and Amazon offer 160 count options for $95.00, while GNC and Ulta offer 120 counts for $70.00.