Alani Nu changed the supplement game with their groundbreaking pre-workout. Want to see if this product can benefit your fitness goals? Read our review to find out if it’s safe to use and the effectiveness of its ingredients. 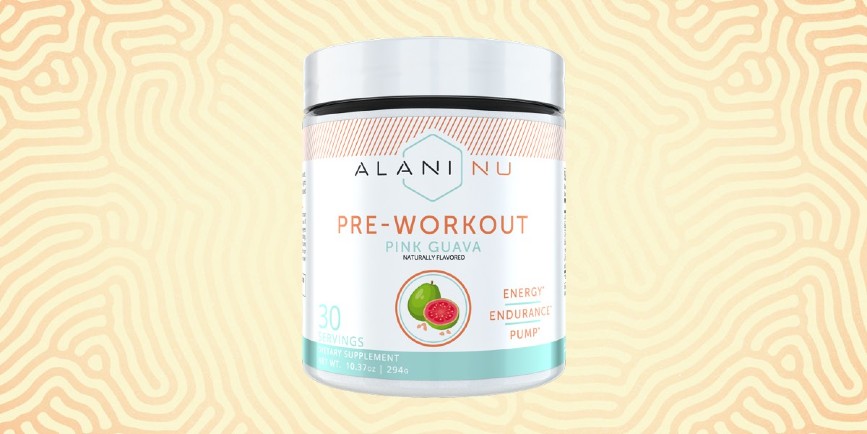 You are not alone if you find it difficult to continue your workout routine after a long day. Many people nowadays believe that they need an extra kick to get everything done, and exercise is no exception.

Alani Nu, the makers of popular, filler-free fat burners and flavorful protein powders, now has its own pre-workout. As a company that specializes in natural formulas and unique flavors, their pre-workout appears to be no exception.

Having the right mindset is almost as important as having the sufficient energy and muscle enhancers for a workout. If you are distracted, stressed, or otherwise depressed, you may feel like giving up – or not working out at all.

This pre-workout supplement promises to help you get the most out of your workout with a balanced ingredient profile of energy boosters and performance enhancers. Even if you go to the gym on a regular basis, you may experience a 'fitness plateau', which limits your exercise potential and prevents you from reaching your desired goals.

This review is part of: The Best Pre-Workout Supplements For Women You Can Buy

This supplement aims to provide power to your muscles. With more power to muscles, the volume of exercise you can do in a single training session will increase, which will help you break through fitness plateaus that are impeding your progress.

The main goal of this pre-workout is to increase endurance during workouts so that you can see results faster. It combines a number of well-researched ingredients to infuse energy, focus, and drive into your workout, allowing you to train harder than ever before.

Using mood elevators and brain boosters such as L-tyrosine and L-theanine will also help you stay mentally sharp throughout your workout, while also keeping your mind motivated and stress at bay. Alani Nu pre-workout offers a generous serving of 'happy' ingredients that will help put you in the mood to crush your workout.

This small, yet powerful, formula is designed to boost your energy levels so you can keep up with your workouts even if you're on a calorie deficit. Caffeine and other stimulants can help you feel more alert, concentrate better, and hit your targets every time.

Many of the ingredients in pre-workouts have the potential to improve stamina while exercising. By increasing the capacity of how far your muscles can go, you may notice a significant improvement in your progress, easily surpassing previous goals and raising the bar even higher each time you work out.

When it comes to working out, it is critical to be in the right frame of mind. After all, we live busy, stressful lives, which can sometimes serve as an excuse for not pushing ourselves harder or even wanting to work out at all.

Take a look at this alternative: Six Star Explosion Reviews, Ingredients, Does It Work?

Alani Nu combines L-tyrosine, L-theanine, and caffeine to provide solid support for your mental wellbeing, helping to alleviate stress levels so you can stay motivated and more content before and during training to ensure you continue to progress.

It goes without saying that if you do more intense workouts, you will burn more calories. However, the addition of metabolism boosters such as caffeine and l-tyrosine will ensure that you are burning excess fat around the clock. By maintaining your metabolism, your body will continue to break down fat cells and burn them off – even after exercise. 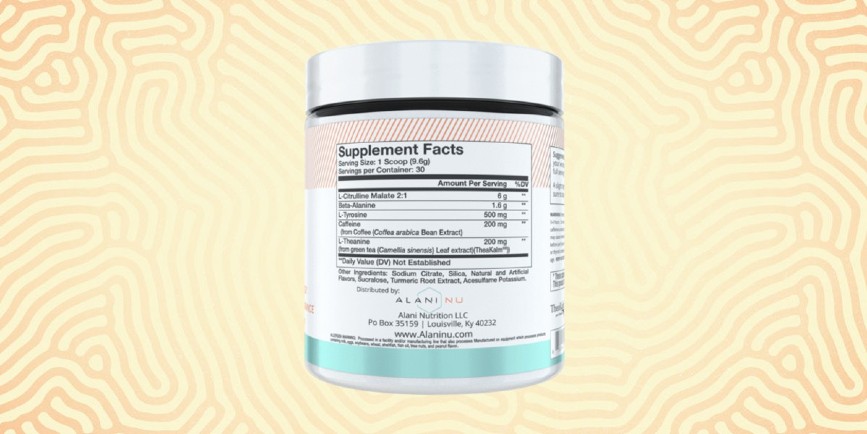 One of the most common pre-workout ingredients is L-Citrulline Malate. It has a large body of evidence supporting its effects on nitric oxide production, power output, and endurance. It is present in this supplement in the form of 6 grams.

This is a derivative of the amino acid L-citrulline, which has been linked to improved exercise performance in a variety of ways. Because it can increase blood flow in your body, research has shown a significant improvement in the endurance and power output of exercise participants, with one study extending workout time by 12 percent after taking L-citrulline 1. Citrulline malate has also been linked to improved weight training performance and fatigue relief 2.

When taken on a regular basis, beta alanine has been shown to increase maximal strength levels. It is, like Citrulline Malate, one of the most popular and well-researched pre-workout ingredients on the market today and 1.6 grams corresponds to 50% of the clinical beta alanine dosage.

Beta-alanine, as a non-essential amino acid, has a variety of properties that may benefit your workout performance. It produces carnosine in your muscles when combined with histidine, which can act as a buffer against muscle acidity. Too much acid in your muscles can prevent them from contracting properly and cause fatigue, especially after vigorous exercise 3. As a result of taking this supplement, you may be able to exercise for longer, with increased muscle endurance to push yourself further in workouts 4,5.

In stressful situations, L-Tyrosine has been shown to improve cognitive performance. It is commonly used as a focus ingredient in pre-workout drinks.

Tyrosine, which is commonly found in other supplements such as fat burners, has been linked to improved concentration, attention span, and alertness 6. It also has de-stressing properties because it produces brain chemicals such as dopamine – the pleasure hormone – and adrenaline/noradrenaline 6.

These chemicals improve nerve cell communication to reduce stress and elevate mood, as well as stimulating production of thyroid hormones that boost metabolism 7,8.

500 mg of L-Tyrosine is a relatively low dose for achieving any anti-stress effects. It is at the lower end of the typical exercise dosage range (500 mg to 2,000 mg).

Caffeine is by far the most commonly associated ingredient with pre-workout supplements. It is well-known for its energizing, motivating, and mood-lifting properties.

Caffeine has a surprising number of benefits, especially when it comes to exercise performance, despite the fact that many people are sensitive to it.

Caffeine activates parts of your brain to increase energy and focus, making it easier to power through workouts, as well as stimulating adrenaline for improved endurance and activating muscles 9-11. It also has thermogenic properties, which may increase fat burning and aid in the release of endorphins, making you feel happier 12,13.

Caffeine dosages of 200 mg are common, and are found in most energy drinks

L-Theanine is an amino acid with numerous health benefits. It is commonly described as a sedative amino acid that promotes relaxation and takes the sting out of caffeine. It is most commonly used to relieve anxiety and stress, as well as to support healthy immunity and improve sleep quality 14.

L-theanine, when combined with caffeine, has been shown to increase levels of focus and alertness throughout your workout 15. 200 mg of L-Theanine is a reasonable dose that should boost some of the synergistic effects it has with caffeine.

Who Should Buy Alani Nu Pre-Workout?

Alani Nu Pre-Workout is an excellent supplement for those who don't desire a supplement full of caffeine, unnecessary ingredients, or tingling from beta alanine.

It contains five tried-and-true ingredients and adheres to Alani Nu's mission of providing simple supplements in appealing flavors. This supplement is also a top-rated choice for beginners searching for a pre-workout supplement without side effects.

Alani Nu does state on the label that the beta-alanine may cause tingling – and there is scientific research to back this up – so it's definitely worth assessing your tolerance with a smaller serving for the first couple of weeks to get your body used to it.

Some stimulants and performance enhancers in the formula, including caffeine, have the potential to cause nausea, insomnia, and jitteriness if you're sensitive.

To avoid any negative side effects from too much caffeine, Alani Nu recommends limiting the number of caffeine-containing substances consumed with the pre-workout.

They also advise speaking with a doctor before using if you are pregnant, lactating, have a medical condition, or are taking any medication to avoid any negative side effects and ensure that it is safe for you to take.

Some people have reported feeling sick after taking it, but as long as you follow the directions, you should not experience any negative side effects.

That said, if you begin to feel ill or experience any unpleasant side effects after taking the pre-workout, discontinue use immediately and seek medical advice before continuing your cycle.

When it comes to pre-workout supplements, this one is pretty good overall. The fully transparent label of well-researched ingredients offers users confidence that Alani Nu has truly considered what they want to achieve with this supplement.

If you search for reviews on the internet, you'll notice that there aren't many negative ones. There are tens of thousands of reviews on the Alani Nu Pre-Workout product page alone, and it's clear that this pre-workout is a hit with most people - receiving 4.9 out of 5 stars. Even on Amazon, 82% of customers gave it 5 stars, which is quite impressive.

As with any supplement, not everyone will like it and you'll never be able to persuade everyone to buy the product.

However, the sheer volume of positive feedback for this supplement suggests it's well worth a shot. Although there are a couple of negative comments in the reviews, the handful of complaints are quite small when compared to the number of reviews the product received in the first place, which is very encouraging.

Even though it contains caffeine, which may prevent some ladies from purchasing it if they are caffeine sensitive, it also uses L-theanine to keep side effects like jitters at bay, demonstrating the company thoroughly considered their formula and its potential hazards.

Where to Buy Alani Nu Pre-Workout

Alani Nu is a low-cost pre-workout formula marketed for the general consumer. A month's supply of Alani Nu costs around $40 on Amazon.

What Is This Supplement?

Alani Nu Pre-workout is a powdered pre-workout supplement that is designed to boost endurance and enhance workout performance for athletes and fitness enthusiasts when consumed before workouts. It is marketed for women with its science-supported ingredients, clean formula, and natural stimulant effect.

What Are Its Ingredients?

Alani Nu’s pre-workout supplement has a short ingredient list, starting with l-citrulline, beta-alanine, l-tyrosine, and caffeine. The combination of these ingredients provides an effective formula that is intended to optimize workout sessions by boosting energy and endurance levels while supporting healthy recovery post-workout.

What About The Side Effects?

Alani Nu’s pre-workout supplement is viewed as safe to consume by healthy individuals. It does offer a significant source of caffeine so those who are sensitive to stimulants may experience jitters, headaches, nervousness, stomach ache, and cramping. There’s also a risk of dehydration.

Alani Nu Pre-workout supplement is manufactured by the health supplements and wellness brand Alani Nu. Alani Nu is a wellness brand that manufactures its products in GMP-certified facilities. Their products are tested for quality, and the company is located in the United States.

What Is Its Price?

Alani Nu’s pre-workout supplement costs around $39.99 for a one-month supply when purchased from the manufacturer's website. There you can find subscribe and save options, which offer a 5% discount on the sale price. The company also offers a 30-day money-back guarantee.

Where Can I Buy It?