Nootropic supplements on the brain? Check out our review of Natrol’s Cognium to decide if this product can benefit you, how safe it is, and whether the ingredients used live up to your healthy living standards. 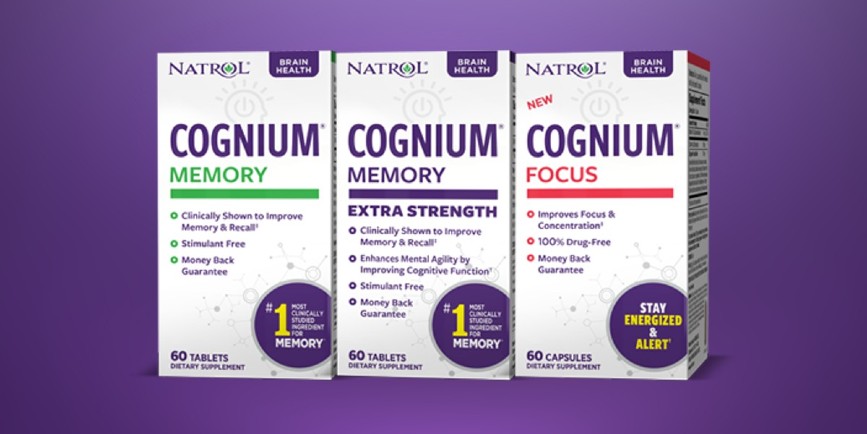 Natrol Cognium is an all-natural nootropic supplement formulated to optimize cognitive abilities and enhance brain function. Cognium, according to the manufacturer, has been clinically shown to function according to the claims. With one single active compound to boost cognition, the supplement promises to aid memory, blood flow to the brain, and offer antioxidant protection 1.

This potent nootropic also claims to increase concentration and improve memory without the use of caffeine or other stimulants that can make you jittery. It can help you deal with stress and protect your brain cells from damage caused by age and other factors.

Natrol Cognium is meant to promote optimum brain performance by boosting cognition, increasing focus, and strengthening memory, similar to other memory pills on the market. It is believed to have full benefits within four weeks of usage and to result in long-term improvements in brain health. Natrol Cognium contains one active ingredient: CERA-Q.2.

CERA-Q - Silkworm cocoon protein - and according to Natrol, CERA-Q has some impressive brain-boosting cognitive advantages 2: 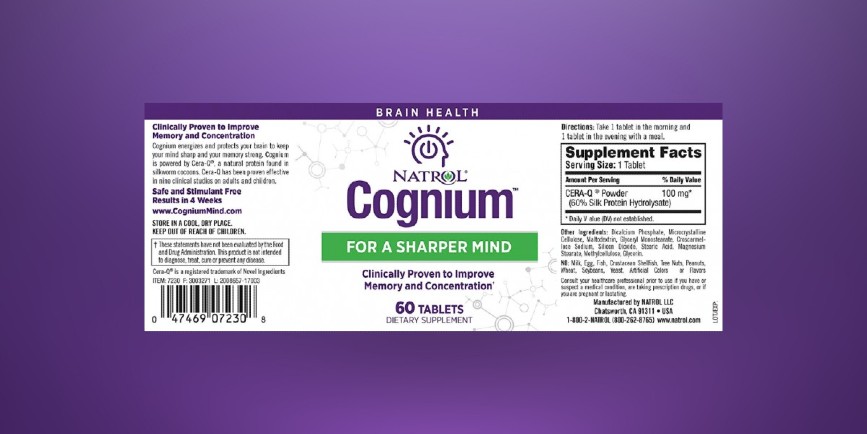 Silk protein hydrolysate, also known as silk fibroin, is a protein that is found in silkworm silk used to make cocoon thread. It is abundant in the amino acid glycine, as well as others like L-alanine, L-serine, and L-valine. When silk protein is hydrolyzed, the protein's bioavailability improves, which in turn increases the amount that can be used by the brain and body 5.

Take a look at this alternative: Organifi Pure Reviews, Ingredients, Does It Work?

CERA-Q is not a stimulant, which may lower the risk of side effects, particularly in sensitive users 5. Stearic acid is the fatty acid and inactive compound used in many nootropic supplements to soften things 6. Last but not least, Dicalcium Phosphate is a calcium phosphate form with no active properties, primarily used as a filler ingredient 6.

Natrol Cognium Safety and Side Effects

According to the company, Natrol Cognium is safe to use and has no reports of significant negative side effects.

According to user feedback, many did not experience any negative side effects with Cognium. That said, some users have reported sleeplessness when taking the product in higher doses than recommended.

Having said that, supplements like Natrol Cognium may have some minor and uncommon side effects, such as nausea, vomiting, excitability, digestive distress, excessive thirst, or dry mouth.

Who Should Buy Natrol Cognium

Natrol Cognium is an organic cognitive enhancement supplement marketed for healthy adults who want to improve memory and recall, or gain an advantage in the workplace, the classroom, or even for better athletic performance.

Cognium is also for those who want to age gracefully and improve their overall health and well-being, as well as anyone concerned about cognitive decline as they age.

On Amazon, the Natrol Cognium has over 3000 reviews. Customer feedback has been overwhelmingly positive, with the majority of users stating that they are extremely pleased with the results. Cognium has a 4.1/5 star rating on Amazon because of this.

Take a look at this list: Best Natrol Supplements You Should Know

Customers who have left Cognium reviews say the product proved beneficial for them. Cognium reviews claim that this nootropic supplement helped them focus and concentrate better on things like conversations. Some found that Natrol Cognium significantly improved memory recall, allowing them to effectively remember names. Many people have found that combining Cognium with other supplements like ginkgo and turmeric yields the best results.

Where to Buy Natrol Cognium

The official site is always the first and best place to buy any supplement. Natrol Cognium can also be purchased on Amazon, eBay, Walmart, and other online retailers.

Aside from online retailers, Cognium has a large distribution network and is sold in a variety of offline pharmacies and stores across the United States.

If you buy Natrol Cognium on Amazon, one bottle (30 servings) costs around $17. This price range is ideal for people who are on a limited budget.

Natrol
Natrol specializes in vitamin and mineral supplements that have food incorporated into them to produce health benefits.